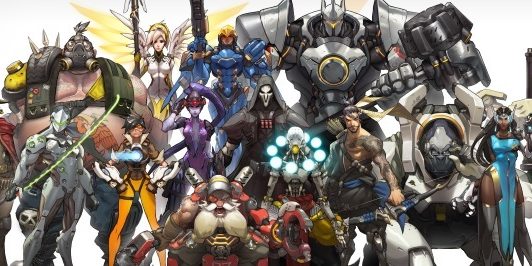 Roadhog is trying to flank. Trying. Widowmaker doesn’t have a clear view of the control point. Tracer’s attempting a frontal assault, because THAT makes sense. Mercy is nowhere to be seen. Soldier: 76 is pure spray-and-pray. And no one has any clue what Pharah is doing.

Right down the line, every player seems to be working their own strategy. No one’s in alignment. There’s no sense of connection. It’s like everyone’s playing their own private match.

This team doesn’t stand a chance.

What you can learn about IT support from Overwatch.

In Overwatch, there’s no winning without teamwork. It’s just not going to happen. That’s part of the beauty of the game.

There are first-person shooters where a single player can carry the whole crew. Not here. If you want to up your competitive ranking, it’s not enough to be good. You have to be good with other people. You have to be a team player. You have to know how to work together.

There’s no other way.

In that sense, Overwatch has a lot in common with IT support.

Teamwork and IT support.

When we play Overwatch (and we DO play Overwatch), we make it a point to be cooperative. Six good players who work together will always beat six incredible players who refuse to collaborate. We understand that glory hounds sabotage otherwise good teams.

And we bring the same philosophy to work.

There’s no room in IT support for showboating. That’s not why we do what we do. Instead, IT support should be about empowering your business. Sure, we strive to be among the best IT support professionals in the field. But even with our amazing reputation, if you’re not winning, we’re not winning.

That’s because we’re on the same team, and teamwork is a core element of good IT support.

The support you need.

IT support should be both proactive and responsive. Let’s break that down.

The best IT support strategy is a proactive strategy. To put it in Overwatch terms, this is the difference between playing a balanced, offense-first match versus focusing exclusively on defense. The team willing to go on the offense is far more likely to win.

We bring that approach to your tech support by getting serious about staying ahead of potential problems. We do that by providing around-the-clock network monitoring, solid cybersecurity and thorough backups. Not only that, but we’ll routinely take a closer look at your system in search of opportunities for improvement.

Even though we can catch most problems before they become issues, we can’t catch everything. No one can. Even a really good Overwatch team will occasionally take some unexpected damage and have to fight to come back.

When that happens with your network, we’ll be there. Our IT support response is fast and solution-focused. Our goal is to address hang-ups as quickly and effectively as possible, getting you back up and running with minimal downtime.

Everyone’s the hero in their own story. You’re no different. But just because you’re a hero doesn’t mean you don’t need support.

The pros at HC Tech Guys know how to do IT support the right way. We can catch most issues before you even know they’re there. And when something sneaks past our defenses, we’ll deal with it faster than you can say, “Nerf This!”

We’re Hill Country Tech Guys, and we’d love to be your solution for IT support. Contact us today if we can help . . . or if you’re looking for some gamers to round out your next Overwatch team.